A trip to the Spanish capital would be incomplete without a visit to the Madrid Zoo Aquarium; or Zoo de Madrid as it is called in Spanish. A short trip east in the Madrid subway from the center of the city will take you to a large park area known as Casa de Campo. The Madrid Zoo, is located next to this natural area. Over the years the popular Spanish zoo has continually added and updated its installations including an area dedicated to dinosaur replicas.

Madrid’s zoo, in the Casa de Campo, is a fairly standard European city zoo and is home to about 3000 animals. Exhibits range from white Siberian tigers to mambas, Atlas lions, zebras, giraffes, rhinoceroses, flamingos, koalas and celebrity pandas. There’s also an aquarium with shows, but remember that animal welfare groups suggest interaction with dolphins and other sea mammals held in captivity creates stress for these complex creatures. 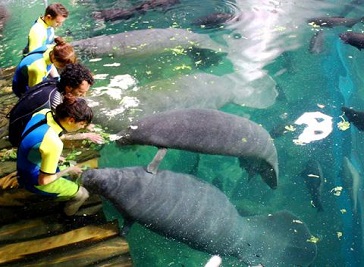 Faunia is a zoo and a botanical garden located in Madrid. It covers about fourteen square hectares and is organized into areas representing different ecosystems, like jungle, poles, and African forest.
Read More

d. Madrid Zoo was formerly housed in the eastern part of Parque de Retiro nearer the centre of the city, but was moved to its current location to merge with the aquarium in 1995 and became Zoo y el Acuario de Madrid. Madrid Zoo and Aquarium is considered one of the most modern and important zoos in Europe. It houses a Zoo, an Aquarium, a Dolphinarium and an Aviary.
Read More