The 10 Hottest New Restaurants in Madrid

The 10 Hottest New Restaurants in Madrid. 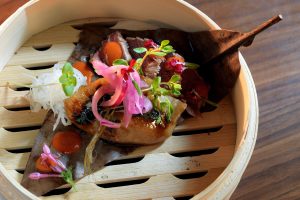 The 10 Hottest New Restaurants in Madrid

Today, Eater returns to Madrid to discover the newest drinking and dining destinations the Spanish capital has to offer, and once again, Paula Móvil, a Madrid-based journalist and lifestyle editor for Condé Nast Traveler, is here to share her picks for the hottest bars and restaurants in the city.

Here now, and in geographic order, the Eater Heatmap to Madrid:

Chef Julio Zhang first became well known with the small restaurant he owned near the Plaza de los Mostenses. Although the restaurant lacked style, it made up for it by serving Chinese food with flavors from Thailand, Japan, Hong Kong, and Spain. Plus, the prices were cheap compared to the quality of his food. Once Zhang’s name made it to every newspaper headline, he took the opportunity to move his concept to an upscale location complete with an Instagram-worthy design. The prices have gone up a bit, but the food has managed to keep up the pace with tasting menus that change daily.

This restaurant — located in a quiet residential neighborhood — has been around for several years now, but it wasn’t until its new chef, Victor Membibre (the son of the former owners), took over that it caught the attention of gourmands and journalists. In the bar area, Membibre serves casual “miniature cuisine,” while in the dining room the focus is on the daily tasting menu, which is composed of classic dishes like the pigeon Mont Royal or the lièvre à la royale. There is room for adventure, though, with more daring dishes like the chili crab, but with this place’s classic ambience and old-school Spanish casa de comidas decor, guests immediately feel at home.

Roberto Martínez Foronda was one of the founding fathers of the great Nakeima Dumpling Bar, but eventually he decided to fly solo and open his own project. The place he chose to do so was certainly original: a “booth” inside Mercado Vallehermoso. With one communal table and an open kitchen, he has proven his skills mixing Latin American, Spanish, and Asian flavors in shareable dishes that imitate street-food flavors. Make sure to arrive before your reservation to enjoy a beer or a glass of vermouth while strolling around to take in the culinary offerings.

The Sandoval brothers had been making history with Restaurante Coque — located in Humanes, which is short a train ride away from Madrid’s city center — for more than 17 years. But recently they decided to move their restaurant to the posh Almagro neighborhood in what seems to an attempt to snag their third Michelin star, as well as to attract a wider and more diverse clientele. Their two tasting menus, which include their famous suckling pig, are paired with a sensory experience that takes guests through each room in their restaurant, giving them a taste of Mediterranean flavors and Spanish culinary technique. Just make sure to a book a table months in advance. Jon Hamm did, and he loved it.

Once an institution in Madrid, Café Comercial was a meeting point and cradle of bohemian creation, as well a part of the city’s golden age of cafes, but it closed down a couple of years ago when its owners retired. When Grupo El Escondite — the team behind Lady Madonna, Barbara Ann, and El Escondite — decided to take over its management, people were hesitant that they could keep the legend alive. However, they managed to show the public and the critics that it is possible to balance the history of the space with modern times. The cafe offers classic Spanish breakfasts and snacks like croissants, toasts, and churros; vermouth and cañas in the bar area; and traditional dishes with a twist in the restaurant.

In a street filled with the best vintage stores around, some might wonder why there is a large line of people waiting outside a tiny ice cream parlor. The reason is simple: it’s the only place in Madrid that sells taiyaki. The craze features Japanese fish-shaped cones filled with soft serve ice cream and decorated with a variety of toppings. The place is small and the line is long, but the wait is worth it.

Chef Agustín Gonzalez’s pop-up dinners were so popular that he decided to venture out on his own with a brick-and-mortar restaurant. Located next to the Temple of Debod — featuring a small dining room with barely five tables — Gonzalez cooks tasting menus filled with Nordic-inspired cuisine that is certainly different from everything else in Madrid’s current food scene. If Agustín offers his mushroom or lemonade ice cream with green pepper, guests are certainly in for a ride.

Galicia’s seafood and trademark cuisine has found itself a home in the City Center courtesy of chef Iván Dominguez. The restaurant’s interior is composed of a long counter with an open kitchen where the chefs are prominently on display while they create, cook, and plate the dishes. The items on the menu feature influences from all over the world — especially Asia — to enhance the flavors of the seafood. So don’t expect to get a taste of Spanish tradition here, just a lot of fun. No reservations accepted.

Cocktail bars are not prevalent in a city like Madrid, a place where cañas (draft beer), wines, and gin and tonics are still the main choice. However, cocktails are slowly starting to find their place in what seemed to be a market reserved for old-school establishments like Del Diego and Cock Bar. After the opening of critical darling 1862 Dry Bar in the Malasaña neighborhood, followed by Salmon Guru in the Literary Quarter, the intimate Baton Rouge Cocktail Bar opened, serving both creative and classic drinks near Puerta del Sol.

Serving as a culinary tribute to Spain’s punk rock music boom in the 1980s, Axel Hotels’ latest restaurant Las Chicas, los Chicos y los Maniquís is a mix of director Pedro Almodovar’s movies and a funky vibe, accompanied by music that honors pop culture nostalgia. Located near the Literary Quarter and Puerta del Sol, it features a menu filled with Madrid’s classic dishes adapted to modern times and created with plenty of imagination.